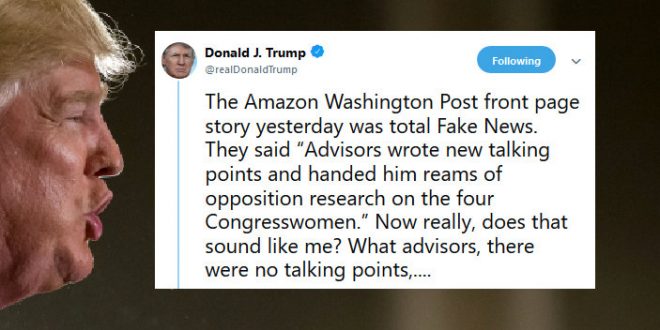 President Trump on Monday lashed out at the media, targeting The Washington Post in particular, as he remained fixated on coverage of his ongoing attacks on four progressive congresswomen.

In a series of tweets, the president claimed the “Mainstream Media” has “gone bonkers,” and accused the media of pushing “Radical Left Democrat views.” Trump took issue with a line of The Washington Post piece that said advisers wrote out talking points and handed the president “reams of opposition research on the four Congresswomen.”

In fact, a Post photographer captured a photo of Trump at a White House event last week with sheets of paper containing bullet points of information about Omar and the other representatives.

The Amazon Washington Post front page story yesterday was total Fake News. They said “Advisors wrote new talking points and handed him reams of opposition research on the four Congresswomen.” Now really, does that sound like me? What advisors, there were no talking points,….

….except for those stated by me, & “reams of paper” were never given to me. It is a made up story meant to demean & belittle. The Post had no sources. The facts remain the same, that we have 4 Radical Left Congresswomen who have said very bad things about Israel & our Country!

The Mainstream Media is out of control. They constantly lie and cheat in order to get their Radical Left Democrat views out their for all to see. It has never been this bad. They have gone bonkers, & no longer care what is right or wrong. This large scale false reporting is sick!

Fake News Equals the Enemy of the People!

“not against boarder aid – concentration camps”
“works hard on border – 28% in apprehensions”
More #TrumpNotes from todays Cabinet Meeting with @realDonaldTrump @washingtonpost as always flipped and rotated for your viewing pleasure. #trump pic.twitter.com/WpmE2XUjHV

President @realDonaldTrump holds up a paper with tweets about @IlhanMN Rep. Ilhan Omar, D-Minn., as he speaks during a cabinet meeting in the cabinet Room today. #trumpnotes #trump @washingtonpost pic.twitter.com/3Qxg8stdfU