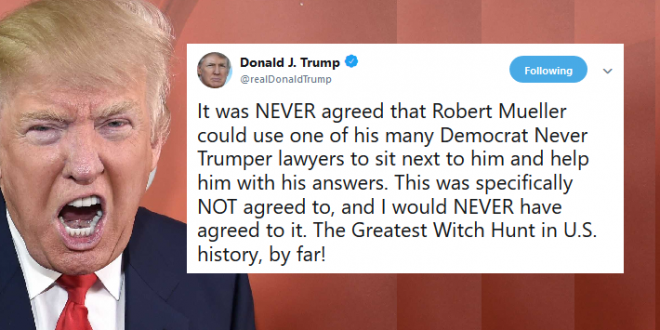 Trump Rants About Mueller’s Lawyer: I Didn’t OK This

After almost two years of investigation, Special Counsel Robert Mueller will be on Capitol Hill on Wednesday to appear before a pair of House committees and answer questions about the Russia investigation.

President Trump is already up and tweeting about the Mueller hearing, echoing GOP complaints that Mueller will have a top aide from the investigation with him at the hearing.

President Trump has said he’s not going to be watching Mueller – or at least not much of the hearing. After at first celebrating the Mueller Report – “no collusion, no obstruction” – the President has expressed his frustration with the fact that Mueller will be testifying at all.

So Robert Mueller has now asked for his long time Never Trumper lawyer to sit beside him and help with answers. What’s this all about? His lawyer represented the “basement server guy” who got off free in the Crooked Hillary case. This should NOT be allowed. Rigged Witch Hunt!

So Democrats and others can illegally fabricate a crime, try pinning it on a very innocent President, and when he fights back against this illegal and treasonous attack on our Country, they call It Obstruction? Wrong! Why didn’t Robert Mueller investigate the investigators?

It was NEVER agreed that Robert Mueller could use one of his many Democrat Never Trumper lawyers to sit next to him and help him with his answers. This was specifically NOT agreed to, and I would NEVER have agreed to it. The Greatest Witch Hunt in U.S. history, by far!