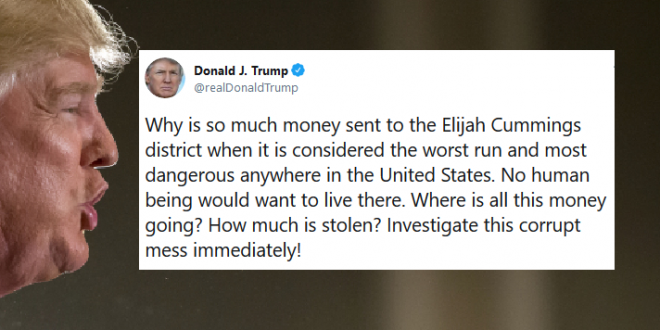 Trump Rages: Elijah Cummings Is A “Brutal Bully” And His Baltimore District Is “Disgusting Rat-Infested Mess”

Donald Trump kicked off his weekend with a stinging attack on Elijah Cummings, the Democratic chair of the House oversight committee who is a prominent critic on immigration policy, the Mueller report and more.

With no discernible irony, Trump called Cummings “a brutal bully” for, he said, “shouting and screaming at the great men and women of Border Patrol about conditions at the southern border.”

“His Baltimore district is FAR WORSE and more dangerous,” Trump added, calling it without offering evidence “the Worst in the USA”. Characteristically, the president also advocated an investigation of a political foe.

Rep, Elijah Cummings has been a brutal bully, shouting and screaming at the great men & women of Border Patrol about conditions at the Southern Border, when actually his Baltimore district is FAR WORSE and more dangerous. His district is considered the Worst in the USA……

Why is so much money sent to the Elijah Cummings district when it is considered the worst run and most dangerous anywhere in the United States. No human being would want to live there. Where is all this money going? How much is stolen? Investigate this corrupt mess immediately!

Trump's attack on Rep. Cummings is a straight recitation of a Fox segment. "Living conditions at the border are better than most areas in his district, the city lined with abandoned building and trash on the streets."

I really cannot stress enough how virtually every seemingly random Trump tweet is really just him responding to what he just saw on Fox, particularly the unhinged ones in which he lashes out at perceived enemies.