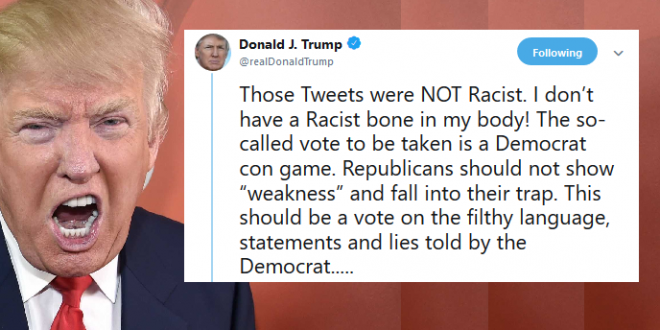 Trump Rages: Congress Should Be Voting On “Filthy Language” By Dems, Not My Totally Not Racist Tweets

President Donald Trump begged House Republicans not to join Democrats in condemning him for racist tweets against four congresswomen — and stepped up his attacks on the first-year lawmakers. House Democrats plan to vote Tuesday on a formal condemnation of the president for repeatedly telling the quartet of lawmakers to go back to their home countries, although only one was not born in the U.S. and has become an American citizen.

Those Tweets were NOT Racist. I don’t have a Racist bone in my body! The so-called vote to be taken is a Democrat con game. Republicans should not show “weakness” and fall into their trap. This should be a vote on the filthy language, statements and lies told by the Democrat…..

…..Congresswomen, who I truly believe, based on their actions, hate our Country. Get a list of the HORRIBLE things they have said. Omar is polling at 8%, Cortez at 21%. Nancy Pelosi tried to push them away, but now they are forever wedded to the Democrat Party. See you in 2020!