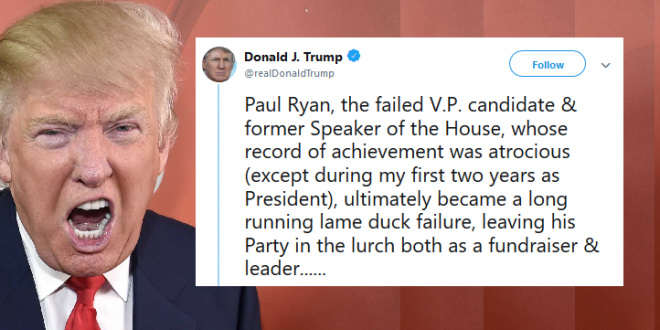 President Donald Trump lashed out at Paul Ryan late Thursday night on Twitter following the release of excerpts from an upcoming book in which the former Speaker of the House criticized him for not knowing “anything about government.”

Shortly after CNN covered Ryan’s comments about Trump in Tim Alberta’s “American Carnage,” which details how Republicans have changed with Trump’s rise to the presidency, Trump responded with a series of insults in three tweets.

Ryan reportedly told Alberta he couldn’t stand another two years with Trump and called retirement an “escape hatch,” according to excerpts obtained by The Washington Post.

Paul Ryan, the failed V.P. candidate & former Speaker of the House, whose record of achievement was atrocious (except during my first two years as President), ultimately became a long running lame duck failure, leaving his Party in the lurch both as a fundraiser & leader……

….When Mitt chose Paul I told people that’s the end of that Presidential run. He quit Congress because he didn’t know how to Win. They gave me standing O’s in the Great State of Wisconsin, & booed him off the stage. He promised me the Wall, & failed (happening anyway!)……

….He had the Majority & blew it away with his poor leadership and bad timing. Never knew how to go after the Dems like they go after us. Couldn’t get him out of Congress fast enough!

Speaker Paul Ryan is a truly good man, and while he will not be seeking re-election, he will leave a legacy of achievement that nobody can question. We are with you Paul!