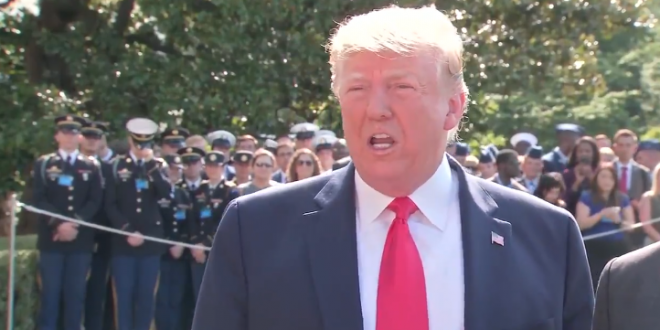 Trump: Maybe Paul Ryan Was Bribed To Insult Me

In a lengthy rant to reporters at the White House today that was unhinged even by Trumpian standards, the president made several attacks on the former Speaker of the House. Employing his favorite method of turning the insult around on the insulter, Trump claimed it was Ryan who had no knowledge of the government: “Frankly, he was a baby, he didn’t know what he was doing.”

More strangely, Trump’s indictment of Ryan’s tenure includes lambasting him for failing to get subpoenas: “He was no leader … he wouldn’t get subpoenas … when Nancy Pelosi hands them out like they’re cookies.” And most strangely of all, Trump insinuated Ryan is only criticizing him because he is accepting secret bribes. “For him to be going out and opening his mouth is pretty incredible. But maybe he gets paid.”

I can confirm that I did not pay Paul Ryan for the interview. (He did, however, offer me a Miller Lite at 2pm.) https://t.co/AdFw6N5Gg4

President Trump: “For Paul Ryan to be complaining is pretty amazing. I remember a day in Wisconsin, a state that I won, where I stood up and made a speech and then I introduced, and then they booed him off the stage, 10,000 people.” pic.twitter.com/EGkuMDJOME

Previous REPORT: Epstein Hired Investigators To Intimidate His Accusers, A Dozen New Alleged Victims Come Forward
Next MAGA Vlogger Advises Trump World: Attacks On The Left Don’t Have To Be True, They Just Have To Go Viral