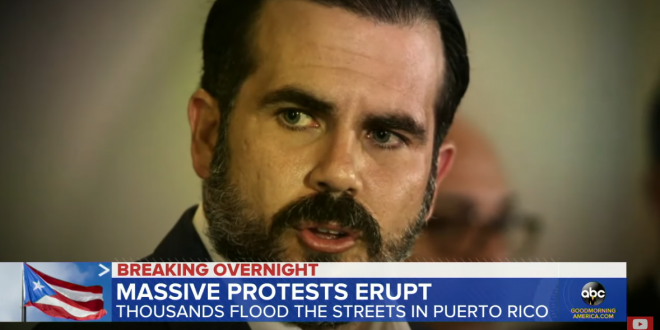 Some of Puerto Rico’s biggest stars rallied a crowd of many thousands in San Juan on Wednesday, calling on the island’s governor, Ricardo Rosselló, to resign. It was the fifth day in a row of protests in the U.S. territory, following a leak of hundreds of pages of misogynistic and homophobic texts between the governor and his main advisers.

During the day, trap artist Bad Bunny and singer Ricky Martin were among the huge crowd that marched to the governor’s mansion.

Tensions ratcheted up in the evening as protesters burst through a barricade at the governor’s mansion and security forces fired tear gas at the crowd, causing many to flee into surrounding streets. A livestream from Puerto Rican news site El Nuevo Día showed chaotic scenes of demonstrators confronting riot police a few minutes after midnight local time.

Puerto Rico Secretary of Public Safety Elmer Román said he will investigate Wednesday night’s violent protests after being shown a CNN video of an officer grabbing a protestor.

Initially, when corespondent Leyla Santiago asked Román why the officer grabbed the protestor, he said it was because the protestor was trying to jump the barricade, which would be illegal.

But when Santiago showed Román the video, where she describes an officer grabbing a protestor that was not trying to jump the barricade, Román said they “obviously needed to investigate.”

The US, of course, has NOT given Puerto Rico $92 billion.

A lot of bad things are happening in Puerto Rico. The Governor is under siege, the Mayor of San Juan is a despicable and incompetent person who I wouldn’t trust under any circumstance, and the United States Congress foolishly gave 92 Billion Dollars for hurricane relief, much….

….of which was squandered away or wasted, never to be seen again. This is more than twice the amount given to Texas & Florida combined. I know the people of Puerto Rico well, and they are great. But much of their leadership is corrupt, & robbing the U.S. Government blind!

The President of the United States says disaster victims in Puerto Rico–all of whom are American citizens–squandered $92 billion in aid, which is amazing given that Puerto Rico has not even received a fraction of that sum.

Trump knows this is a lie, and he keeps saying it. https://t.co/66ecFBexkn