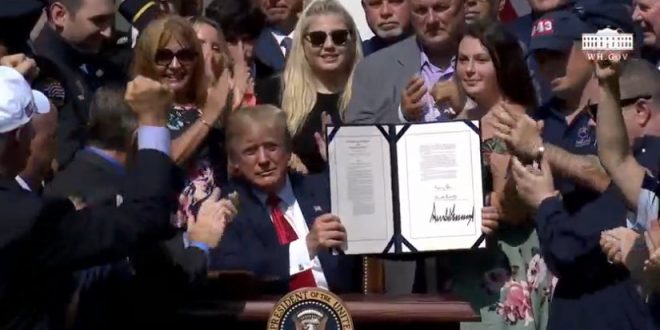 President Donald Trump on Monday signed into law a permanent extension of the 9/11 fund, which would guarantee compensation for victims and responders. It marked a capstone to a massive legislative push that involved moving testimony from survivors, impassioned advocacy from responders, and a bipartisan lift from lawmakers.

But at the signing ceremony at the White House, there was a notable absence: No Democrats were in attendance. Trump had invited eight members of Congress in total.

All of them were Republicans, including Sen. Deb Fischer, from Nebraska. This was by design. Rep. Carolyn Maloney (D-N.Y.) was the lead author of the 9/11 fund bill. But a spokesperson for her office confirmed to The Daily Beast that she was not invited to the event.

Maloney is my House rep.

Previous POLL: Biden Widens Lead To +19 Ahead Of Debates
Next Liberty Counsel: If The Equality Act Ever Becomes Law, Pedophiles Like Jeffrey Epstein Won’t Be Prosecuted