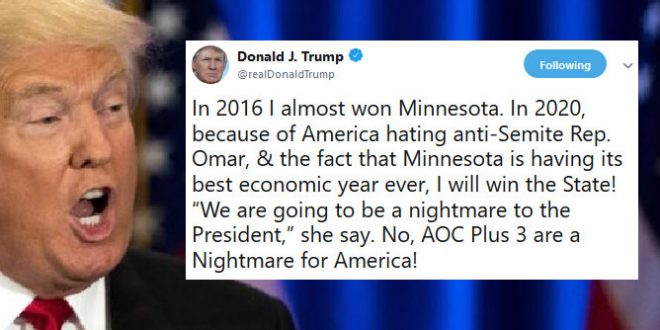 President Donald Trump issued his daily missive aimed at Reps. Alexandria Ocasio-Cortez, Ayanna Pressley, Rashida Tlaib and Ilhan Omar on Tuesday morning via, of course, Twitter. Trump has sought to cast the progressive congresswomen as anti-American ever since his “go back” tweets were widely condemned as a racist attack on four lawmakers of color. In an attempt to win the messaging battle, the Washington Post reported, he has pivoted to the claim he was merely instructing the lawmakers to love the U.S. or leave it.

In 2016 I almost won Minnesota. In 2020, because of America hating anti-Semite Rep. Omar, & the fact that Minnesota is having its best economic year ever, I will win the State! “We are going to be a nightmare to the President,” she say. No, AOC Plus 3 are a Nightmare for America!