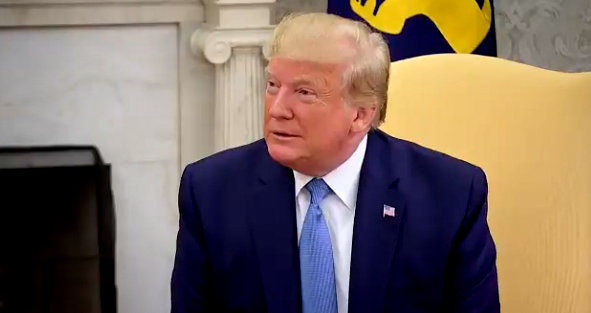 Trump: I Could Win The Afghanistan War In A Week But I Just Don’t Want To Kill Ten Million People [VIDEO]

President Trump said Monday he could end the Afghanistan war “in a week,” but that doing so would cause millions of deaths. “I could win that war in a week. I just don’t want to kill 10 million people,” Trump said during a White House meeting with Pakistan’s prime minister, Imran Khan.

The president added that Afghanistan would be “wiped off the face of the earth” in 10 days if he chose to bring a quick end to the nation’s longest war, which he called “ridiculous” and has helped turn the U.S. into the world’s “policemen.” “I don’t want to go that route,” Trump said.

WATCH: President Trump says that he could win the 18-year Afghan War in 10 days, because he has plans that could wipe Afghanistan off the face of the Earth and kill 10,000,000 people, but “I don’t want to go that route.” pic.twitter.com/IftsRmBjpG

Trump said US troops in Afghanistan are acting like “policemen,” “not soldiers.” He said, “If we wanted to be soldiers, it would be over in 10 days…But I have not chosen that. Why would we kill millions of people? It wouldn’t be fair. In terms of humanity, it wouldn’t be fair.”

Trump, who did the Muslim Ban, said he is going to campaign for Imran Khan who courts the religous vote and is the head of Pakistan, a country of nearly 200 million Muslims. Good luck Imran.

Trump on Iran: “It’s a religious country, or religious leaders, but they lie a lot.”