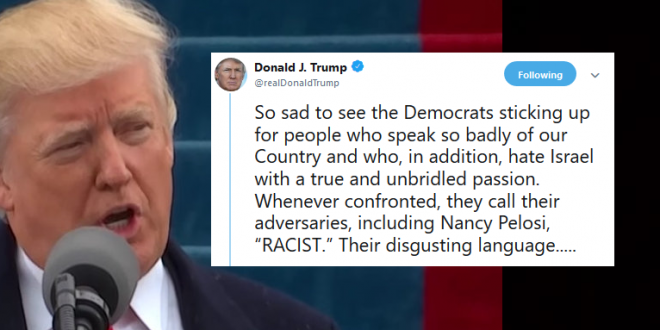 Trump Doubles Down After Racist Attack On Dems

President Trump late on Sunday night doubled down amid a growing backlash over his earlier tweets telling a group of Democratic congresswomen that they should “go back” to the countries that they came from.

Trump was responding to outrage over comments he made earlier on Sunday in which he targeted a group of unnamed progressive congresswomen “who originally came from countries whose governments are a complete and total catastrophe.”

The furor over Trump’s tweets offered an increasingly fractious Democratic Party the chance to unify in its criticism of the president.

So sad to see the Democrats sticking up for people who speak so badly of our Country and who, in addition, hate Israel with a true and unbridled passion. Whenever confronted, they call their adversaries, including Nancy Pelosi, “RACIST.” Their disgusting language…..

….and the many terrible things they say about the United States must not be allowed to go unchallenged. If the Democrat Party wants to continue to condone such disgraceful behavior, then we look even more forward to seeing you at the ballot box in 2020!

but didn’t Trump start his first Presidential Campaign criticizing the US?

Hasn’t Trump said all the past Presidents were terrible?

Isn’t his mantra “Make America Great Again”? As if it was not before he arrived?

WHO needs to love America or Leave?

“My mother, my grandparents, my first wife, and my third wife and her chain-migrated parents didn’t come to the US from other countries only to have it overrun by immigrants!!”