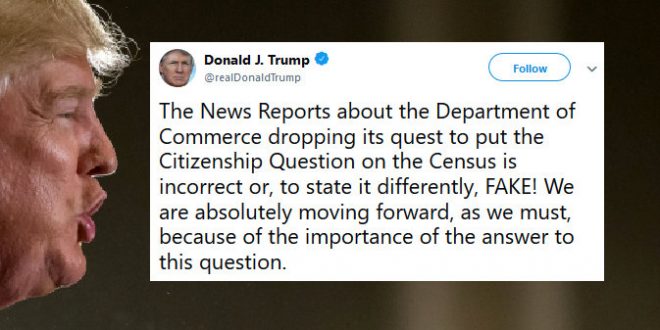 Republican Congressman Chip Roy (R-TX) urged President Donald Trump on Tuesday to ignore the Supreme Court’s decision on a controversial census citizenship question, advising him to print the survey with the question regardless of the court’s ruling.

“It’s the lawyers advising him,” Roy tweeted, evidently referring to the Supreme Court Justices. “[Trump] should ignore them. Completely. Print the Census with the questions — and issue a statement explaining why — ‘because we should.’ Done.”

Roy, a freshman conservative lawmaker whose most famous exploit up until now has been blocking a $19 billion disaster aid package, has been a consistent supporter both of the citizenship question and of Trump’s border wall.

The News Reports about the Department of Commerce dropping its quest to put the Citizenship Question on the Census is incorrect or, to state it differently, FAKE! We are absolutely moving forward, as we must, because of the importance of the answer to this question.

Absolutely. It’s the lawyers advising him. @realDonaldTrump should ignore them. Completely. Print the census with the question – and issue a statement explaining why – “because we should.” Done. https://t.co/ExyvRAmzoN