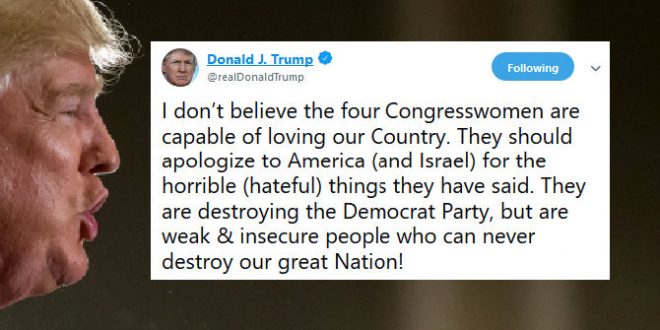 The latest tweets arrived after an extraordinary rebuke of the president’s racist attacks against the four congresswomen of colour — colloquially known as “the squad” — last week, in which the US House of Representatives passed a resolution condemning Mr Trump’s “racist comments.”

I don’t believe the four Congresswomen are capable of loving our Country. They should apologize to America (and Israel) for the horrible (hateful) things they have said. They are destroying the Democrat Party, but are weak & insecure people who can never destroy our great Nation!

Quotes from the occupant of the White House:

“If we don’t clean up OUR COUNTRY of the garbage soon, we are just going to do a death spiral!”

“The idea of American Greatness, of our country as the leader of the free and unfree world, has vanished.”

Waiting for your apology.