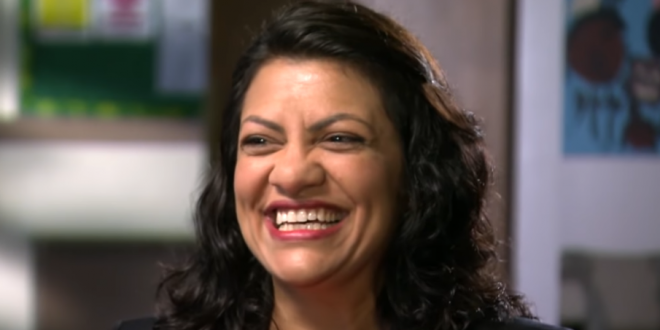 Multiple conservative websites sympathetic to President Donald Trump in his ongoing feud with four Democratic congresswomen of color, put up posts this weekend resurfacing a 2016 video of one of the ‘squad’ members disrupting a Trump event in Detroit.

“You guys are crazy!” Rep. Rashida Tlaib, who was not in Congress at the time, can be heard yelling to attendees as she is being escorted from the event by a security guard leading her by her left arm. “You’re an animal! Get a job!” a person in the crowd yells back.

The clip has been posted by Fox News, The Blaze, Townhall, and others. On Twitter, however, Tlaib’s protest is winning new fans from Democrats. Talk about backfiring.

Crooked called us “Deplorables.” Tlaib calls us “Crazy.” In reality we just love our country, want every American—no matter their race, religion or socioeconomic status—to have a safe & prosperous life & expect our leaders to put America First. It’s simple pic.twitter.com/qUzyfE5z5o

Notice how Trump is calm and does not agitate the situation as Tlaib has a public meltdown and has to be physically removed by security pic.twitter.com/ielSryzNFV

2 years later Rashida Tlaib became the first Palestinian-American woman in Congress and simultaneously one of the first two Muslim women in Congress. ❤

Rashida Tlaib getting kicked out of a Trump Rally in 2016.

Some guy tells her to get a job.

She did. It’s called Congresswoman. pic.twitter.com/EaReskYIqg

Never forget that Rashida Tlaib, a Muslim Congresswoman, protested a 2016 Trump rally where a Trump supporter told her to get a job.

She was elected to Congress two years later. What a badass.

Previous House Republicans Vow Tough Questions For Mueller: This Is Our Chance In The “Final Episode” About Russia
Next WINNING: Chinese Investments In US Plummet 90%