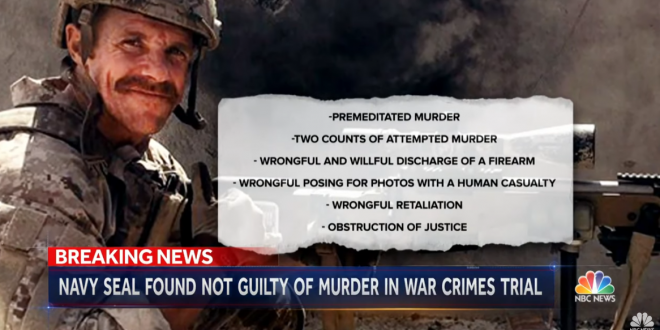 Decorated Navy SEAL team leader Eddie Gallagher was acquitted of nearly all charges in the death of an ISIS prisoner in Iraq, including premeditated murder.

But a jury of seven soldiers in his court-martial found him guilty of posing for a photo with the 12-year-old ISIS fighter, an offense carrying a maximum sentence of four months.

Navy prosecutors said that Gallagher took the photo after fatally stabbing the detainee while he was being treated by US medics. The verdict marked the culmination of a military trial in which fellow SEALs offered contrasting accounts of Gallagher’s behavior in 2017 in Mosul, Iraq.

Congratulations to Navy Seal Eddie Gallagher, his wonderful wife Andrea, and his entire family. You have been through much together. Glad I could help!