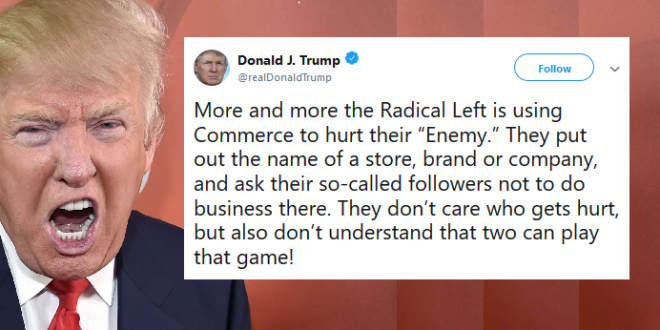 President Trump on Tuesday night came to the defense of Home Depot, calling those who choose not to shop at the home improvement retailer because of financial ties between its billionaire co-founder, Bernard Marcus, and his presidential campaign “vicious and totally crazed.”

He painted Marcus, 90, as a victim of left-wing Democrats wielding “one of their often used weapons.”

If boycotting is a tactic favored by the left, it is a predilection shared by Trump. In his time as president and as a private person, he has repeatedly advised consumers to shun brands he says have slighted him personally, interfered with his agenda or harmed the national interest.

Since entering politics, Trump has called for boycotting Starbucks, Oreo’s, Macy’s, Apple, Harley-Davidson, the Broadway smash Hamilton, and pretty much every media outlet you’ve ever heard of. That’s just for starters.

More and more the Radical Left is using Commerce to hurt their “Enemy.” They put out the name of a store, brand or company, and ask their so-called followers not to do business there. They don’t care who gets hurt, but also don’t understand that two can play that game!

I love that thousands of people are boycotting @Macys and cutting up credit cards. No guts no glory. This really backfired – love it!

Great, and we should boycott Fake News CNN. Dealing with them is a total waste of time! https://t.co/8zJ3j7g5el

Everybody should boycott the @megynkelly show. Never worth watching. Always a hit on Trump! She is sick, & the most overrated person on tv.

Anyone who wants strong borders and good trade deals for the US should boycott @Univision.

A truly great, patriotic & charitable man, Bernie Marcus, the co-founder of Home Depot who, at the age of 90, is coming under attack by the Radical Left Democrats with one of their often used weapons. They don’t want people to shop at those GREAT stores because he contributed….

….to your favorite President, me! These people are vicious and totally crazed, but remember, there are far more great people (“Deplorables”) in this country, than bad. Do to them what they do to you. Fight for Bernie Marcus and Home Depot!