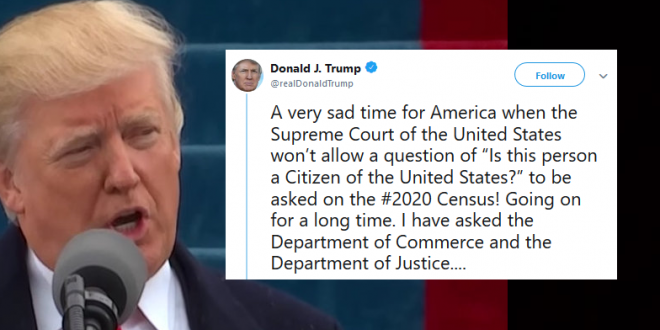 Trump Claims He’s Not Giving Up On Census Question

President Donald Trump expressed frustration Tuesday night that the 2020 census will not include a citizenship question, adding that his administration is not giving up on the fight.

The Commerce Department confirmed earlier Tuesday that the Census Bureau would not ask about citizenship, which Trump had pushed to be included on the 2020 count.

Legal experts have argued that asking for citizenship would decrease the number of responses and could lead to inaccurate figures, possibly jeopardizing the accuracy of congressional representation.

….to do whatever is necessary to bring this most vital of questions, and this very important case, to a successful conclusion. USA! USA! USA!

The Trump administration said it had ordered the Census Bureau to start printing forms for the 2020 census without a question asking about citizenship, abandoning its quest to add the query after being blocked by the Supreme Courthttps://t.co/bFJQgVphdm