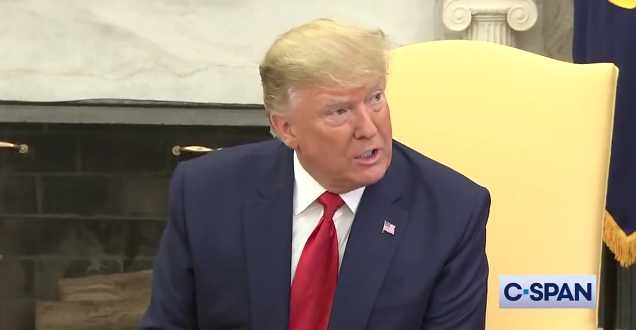 Trump Claims He “Wasn’t A Fan” Of Jeffrey Epstein

President Trump is meeting with Qatar’s Emir Sheikh Tamim Bin Hamad Al-Thani at the White House Tuesday, after dining with him Monday night. The meeting with the Qatari emir comes amid scrutiny of the president and Labor Secretary Alex Acosta for their past interactions with Jeffrey Epstein, who has been arrested for sex trafficking of minors.

Acosta handled an earlier case against Epstein that resulted in light punishment. During the meeting with the emir, Mr. Trump praised Acosta — and said he had a falling out with Epstein. The president said he’s not a fan of Epstein. Mr. Trump said Acosta has “been a very good secretary of labor,” amid Democrats’ calls for Acosta to resign.

The crimes committed by Epstein are horrific, and I am pleased that NY prosecutors are moving forward with a case based on new evidence.

With the evidence available more than a decade ago, federal prosecutors insisted that Epstein go to jail, register as a sex offender and put the world on notice that he was a sexual predator.

Now that new evidence and additional testimony is available, the NY prosecution offers an important opportunity to more fully bring him to justice.

A protester was kicked out of this Trump rally in June of last year for holding a photo of the president and Jeffrey Epstein pic.twitter.com/g1RFYQn8yE

Trump on Alex Acosta: He’s been a very good secretary of labor… What happen 12 or 15 years ago… you know if you go back and look at everybody else’s decisions… you would find that maybe they would wish they did it a different way.”

President Trump says he had a falling out with Jeffrey Epstein. “I knew him like everybody in Palm Beach knew him. He was a fixture in Palm Beach.” But says he wasn’t a fan of his.

“I’ve known Jeff (Epstein) for 15 years. Terrific guy. He’s a lot of fun to be with. It is even said that he likes beautiful women as much as I do, and many of them are on the younger side.” – Donald J. Trump pic.twitter.com/ib4l6rXlKA

Trump tries to backtrack on his characterization of Jeffrey Epstein as “a terrific guy,” now says “I don’t think I’ve spoken to him in 15 years. I wasn’t a fan.” pic.twitter.com/iX1awN0z0I