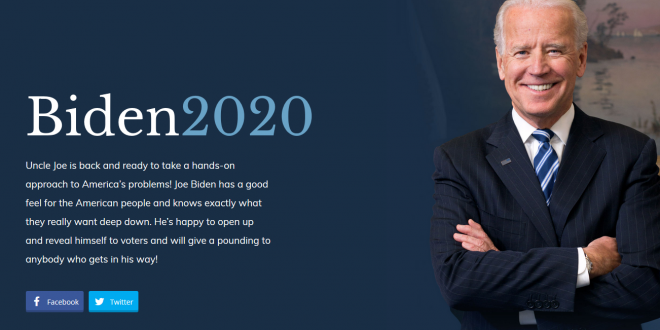 For much of the last three months, the most popular Joseph R. Biden Jr. website has been a slick little piece of disinformation that is designed to look like the former vice president’s official campaign page, yet is most definitely not pro-Biden.

All the site says about its creator is buried in the fine print at the bottom of the page. The site, it says, is a political parody built and paid for “BY AN American citizen FOR American citizens,” and not the work of any campaign or political action committee.

There is indeed an American behind the website — that much is unambiguously true. But he is very much a political player, and a Republican one at that. His name is Patrick Mauldin, and he makes videos and other digital content for President Trump’s re-election campaign.

“Uncle Joe is back and ready to take a hands-on approach to America’s problems,” the site’s header reads, an allusion to allegations related to the former vice president’s inappropriate touching of numerous women. “Joe Biden has a good feel for the American people and knows exactly what they really want deep down.”

Indeed, the inappropriate touching scandal that cast a pall over the early days of the Biden campaign is a main theme of Mauldin’s fake website.

Multiple women came forward earlier this year to allege that Biden displayed excessive closeness when interacting with them, including touching their shoulders or kissing them platonically when they did not feel that level of intimacy was appropriate. None of the allegations involved sexual abuse or misconduct.