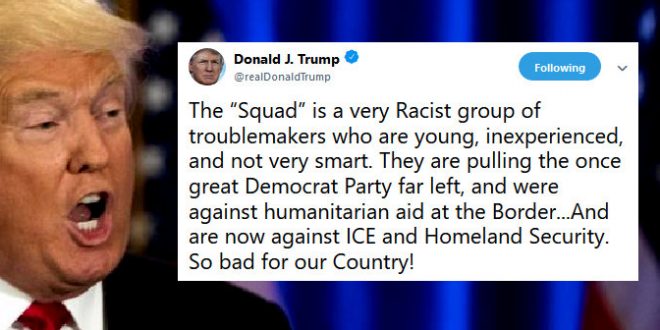 A week after President Trump launched a racist attack on a group of four freshman women Congress members known as “the Squad,” telling them to “go back” to the countries they came from, he is trying to turn the attack around on them. “The squad” are a group of four women of color, including Representatives Alexandria Ocasio-Cortez of New York, Ilhan Omar of Minnesota, Ayanna Pressley of Massachusetts and Rashida Tlaib of Michigan. Just yesterday Trump said the four female Representatives were, “not capable of loving the US”.

The “Squad” is a very Racist group of troublemakers who are young, inexperienced, and not very smart. They are pulling the once great Democrat Party far left, and were against humanitarian aid at the Border…And are now against ICE and Homeland Security. So bad for our Country!

The “President” is a very Racist troublemaker who is old, inexperienced, and not very smart. He is pulling the never great Republican Party far right, and cruelly tortures children at the Border…So bad for our Country!

Remember back in high school when the insecure senior bully would pick on freshman? Trump has two dozen 2020 candidates to battle but he doesn’t think he can win the election fairly, so he is gaslighting us and demonizing four women of color that are newer and easier to smear.

Previous TEXAS: Wendy Davis Announces Bid For US House
Next Trump Wants To Hold G7 Summit At His Golf Resort