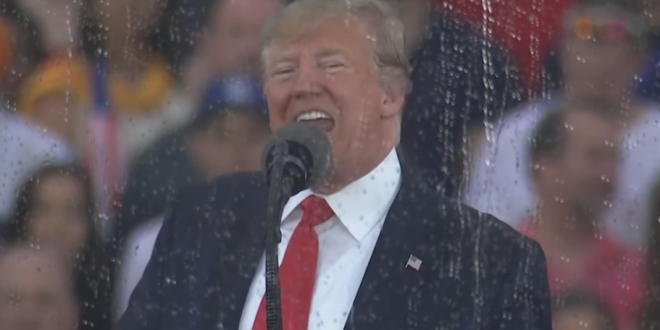 “The teleprompter went out, it went kaput. So I could have said — and actually right in the middle of sentence it went out. That’s not a good feeling. I knew the speech very well so I was able to do it without a teleprompter. But the teleprompter did go out. And it was actually hard to look at anyway because it was rain all over it. But despite the rain, that was just a fantastic evening.” – Donald Trump, blaming the teleprompter for saying that airports existed during the Revolutionary War.

Trump said his Teleprompter went out “right in the middle of that sentence” when he said that the Continental Army took over nonexistent airports. He added, “I guess the rain knocked out the Teleprompter…it was actually hard to look at anyway, ’cause it was rain all over.”

Trump repeated his usual false claim about Americans not paying his tariffs, saying, “Billions of billions of dollars of tariffs are coming in. And China’s paying for it, not our people.” Americans make the payments, and multiple studies have concluded they’re bearing the costs.

Trump repeated his nonsense that Obama sought a meeting with Kim Jong Un, this time saying Obama “called” on “numerous occasions.” There’s no evidence Obama ever wanted a meeting at all, let alone of phone calls. I fact-checked this earlier in the week: https://t.co/SwiK1tentb

Trump now claims this statement was the result of a faulty TelePrompTer. In other words, he needs someone to tell him Cornwallis didn’t have an Air Force. https://t.co/4YnJFjEp5V

Why does @BarackObama always have to rely on teleprompters?

Bad performance by Crooked Hillary Clinton! Reading poorly from the telepromter! She doesn’t even look presidential!

Remember when Trump made fun of Obama and Hillary Clinton for using teleprompters?

Here’s Trump complaining that the teleprompter went out during his 4th of July speech. pic.twitter.com/N8Lu2WONrR

Previous Trump: “I Don’t Think I’m A Bully At All” [VIDEO]
Next Bernie Sanders Hits Biden Over “Far-Left” Dig At AOC