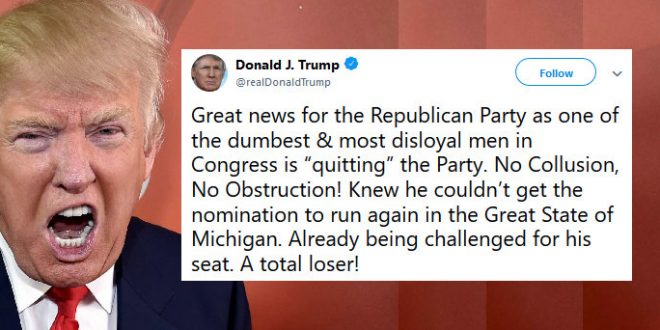 Rep. Justin Amash, the only congressional Republican who publicly argues that President Donald Trump has engaged in impeachable conduct, announced Thursday he is quitting the GOP. Amash didn’t mention the President by name, but his decision to abandon the party comes after months of escalating criticism not just of the President but of his own colleagues for their failure to hold Trump to account, specifically for the actions detailed in special counsel Robert Mueller’s report on the 2016 election and its aftermath.

Great news for the Republican Party as one of the dumbest & most disloyal men in Congress is “quitting” the Party. No Collusion, No Obstruction! Knew he couldn’t get the nomination to run again in the Great State of Michigan. Already being challenged for his seat. A total loser!