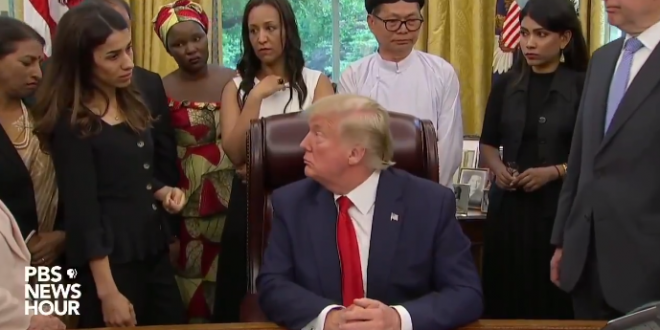 US President Donald Trump on Wednesday appeared unfamiliar with the work and cause of Nobel laureate Nadia Murad as she pleaded with him to help the Yazidis of Iraq.

Murad, one of thousands of women and girls from the ancient faith abducted by the Islamic State group as they overran swathes of Iraq in 2014, joined a group of survivors of religious persecution who met Trump in the Oval Office on the sidelines of a major meeting at the State Department.

After Murad explained how her mother and six brothers were killed and that 3,000 Yazidis remained missing, Trump said, “And you had the Nobel Prize? That’s incredible. They gave it to you for what reason?” With little pause, Murad, who was jointly awarded the Nobel Peace Prize last year, repeated her story.

‘And you had the Nobel Prize? That’s incredible. They gave it to you for what reason?’ Donald Trump asks Nadia Murad

After a pause, the Nobel laureate repeated her story about the deaths of her mother, six brothers, and thousands of the Yazidi communityhttps://t.co/Liah0vrpgu pic.twitter.com/GTReY3CtIK

“But ISIS is gone and now it’s Kurdish and who?” Trump asked, before later telling her, “I know the area very well”. https://t.co/XVXnXuZl91