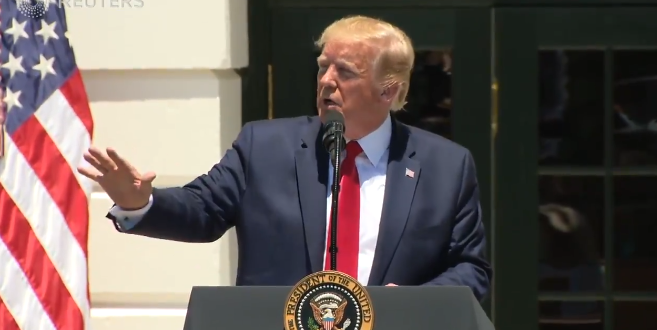 Ms. Pelosi had criticized the president on Sunday for suggesting four lawmakers of color should “go back” to their own countries, and she said that his slogan, “ ‘Make America Great Again’ has always been about making America white again.”

Trump expressed no regrets at a White House event to celebrate American-made products when asked by reporters if he was concerned by widespread criticism that his tweets about the lawmakers were racist.

“It doesn’t concern me because many people agree with me,” Trump said. “And I’ll I’m saying — they want to leave, they can leave.”

Trump said at the White House event that all four have been “complaining constantly” about the United States. “These are people that hate our country,” Trump said. “They hate our country. They hate it, I think, with a passion.”

TRUMP: “We’re at war with Al Qaeda, and she’s somebody talking about how great Al Qaeda is … that was Omar.” pic.twitter.com/33QgBQDkOI

REPORTER: Does it concern you that many people saw that tweet as racist and that white nationalist groups are finding common cause with you on that point?

TRUMP: It doesn’t concern me because many people agree with me. pic.twitter.com/yLTb9Y67ck