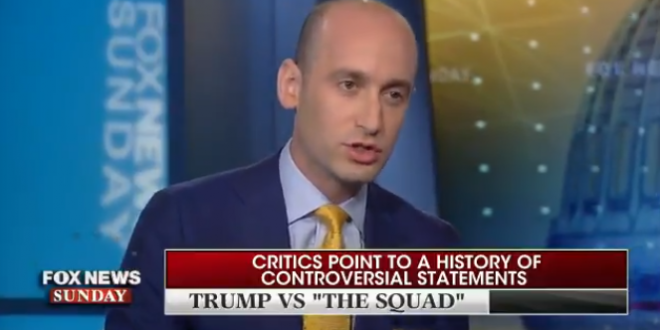 Fox News host Chris Wallace on Sunday pressed White House senior adviser Stephen Miller about the “send her back” chant targeting Rep. Ilhan Omar (D-Minn.) at a Trump campaign rally in North Carolina. The exchange came during an interview in which Wallace repeatedly pressed Miller about Trump’s recent comments and his history of controversial statements.

Miller responded by noting that Trump had already disavowed the “send her back” chant that occurred as the president targeted Omar, a Somali refugee, at a rally. Wallace interrupted, stating that Trump was only “clear after the fact.”

“Excuse me, he let it go on for 13 seconds, and it was only when the chant diminished that he started talking again,” Wallace replied. “He said nothing there or in his tweet after the rally that indicated any concern about the chant.”

Previous Trump Campaign Sells Plastic Straws To Own The Libs
Next LOUISIANA: Local Cop Says AOC Deserves To Be Shot