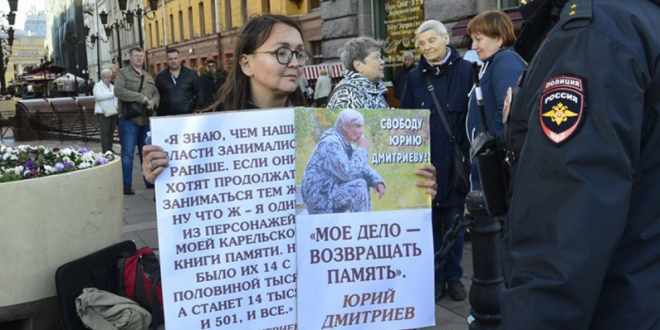 A prominent Russian LGBT activist who had been featured on a blocked website that encourages people to “hunt down” sexual minorities has been killed in St. Petersburg. The website, inspired by the “Saw” horror film franchise and which encourages visitors to track down and assault people believed to be LGBT, was blocked in Russia last week.

Yelena Grigoriyeva was found with multiple stab wounds and signs of strangulation near her home over the weekend, fellow activists said on social media. The activist had regularly received death threats and reported them to the police, who did nothing to protect her before she was murdered, fellow activist Dinar Idrisov wrote on Facebook on Monday.

Reports in the Russian newspaper Fontanka said that a suspect, a “40-year-old resident of Bashkortostan,” had been detained by police. Grigoryeva, 41, was active with Russia’s Alliance of Heterosexuals and LGBT for Equality and other activist causes, according to the Russian LGBT Network.

On July 18, just days before she was killed, Grigoryeva posted an alert on her Facebook page about the “Saw” website. Grioryeva wrote that the site, which organizes a “hunt for homosexual, bisexual and transgender people,” went online in spring 2018 and was shut down several times but always popped back up.

The website posted the personal data of “presumably LGBT+” activists, “including photos and addresses,” and offered prizes to those who completed an attack.

Our heartfelt homage to this fighter of #LGBTIQ+ #rights – people like Yelena Grigoriyeva deserve all our admiration and respect, and will never… https://t.co/Q50vEmcBtf