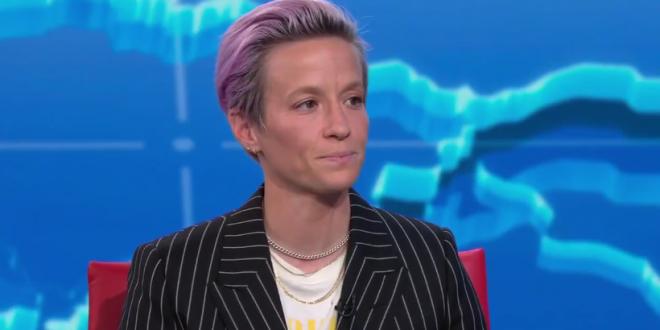 The liberal echo chamber at its finest… after lecturing us on ‘inclusivity’, Ms Rapinoe only wants to talk to anyone ‘who believes the same things we believe in’. https://t.co/4LLMaczqM1

Megan Rapinoe says kneeling during the National Anthem was difficult, but not disrespectful, adding that she is hopeful there will be a day when she will not feel the need to kneel https://t.co/FSUr8pSaqo pic.twitter.com/FQhsvifXDg

Megan Rapinoe on equal pay chants: “This World Cup win is so much than what was on the field. It seems like one of those just sort of iconic turning points in history, to be honest.” pic.twitter.com/yqTB8Y23Kw

Previous Tucker Carlson Goes Full Racist Against Dem Rep
Next Dem Rep To Kellyanne Conway: Take A Seat And Keep My Name Out Of Your Lying Mouth, Distraction Becky