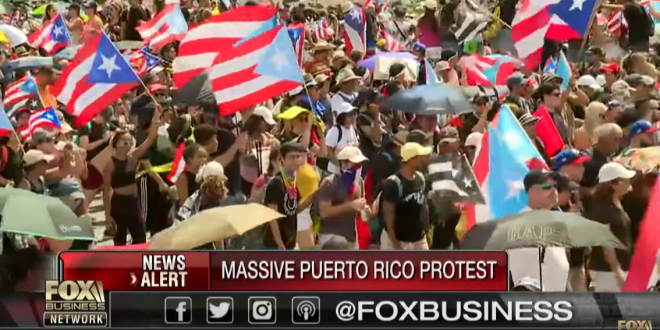 Waving flags, chanting and banging pots and pans, tens of thousands of Puerto Ricans jammed a highway Monday to demand the resignation of Gov. Ricardo Rosselló in a crisis triggered by a leak of offensive, obscenity-laden chat messages between him and his advisers.

The demonstration appeared to be the biggest protest on the island in nearly two decades. “Finally, the government’s mask has fallen,” said Jannice Rivera, a 43-year-old mechanical engineer who lives in Houston but was born and raised in Puerto Rico and flew in to join the crowds.

The protest came 10 days after the leak of 889 pages of online chats in which Rosselló and some of his close aides insulted women and mocked constituents, including victims of Hurricane Maria. In an interview Monday with Fox News, Rosselló said that he will not resign and that he is focused on tackling corruption and helping the island recover from Maria.