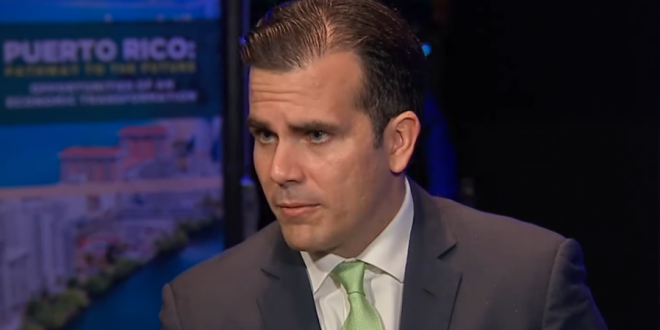 There are new calls this morning for the governor of Puerto Rico to resign, after leaked conversations reveal his part in a profane and derogatory group chat. The island has struggled to recover from Hurricane Maria in 2017, and Governor Ricardo Rosselló’s administration has been plagued by scandals involving funding. Two of Rosselló’s top officials stepped down this weekend, after the leaked group chat showed Rossello and his allies discussed confidential information and slandered other officials, politicians and journalists.

The governor was the administrator of this chat room, where they discussed setting up a troll network to go after anyone seen as critical of this administration. The leaked chat room conversations among Rosselló and 11 others are laced with profane, homophobic and sexist comments, and in one case even a death threat against the mayor of San Juan, Carmen Yulín Cruz. The governor’s chief financial officer, Christian Sobrino, wrote, “I’m dying to shoot her up.” Rosselló replied, “You’d be doing me a big favor.”

Protesters in Puerto Rico gathered outside La Fortaleza governor’s residence on Sunday, demanding Gov. Ricardo Rosselló step down for his involvement in a private chat in which he used profanities to describe an ex-New York City councilwoman and a federal control board overseeing the island’s finances.

The demonstrators included teachers, union workers, students, members of a feminist collective and others who congregated in front of the mansion chanting, “Ricky resign, the people don’t want you!”

Undersecretary of La Fortaleza’s press office, Michelle De la Cruz, said she did not know if the governor was home. The residence’s main doors were padlocked and other entrances were barricaded shut and monitored by police.

Previous REPORT: Wilbur Ross On Chopping Block Over Census
Next Duggar Sisters Win Right To Sue City For Revealing Info About Being Incestuously Molested By Their Brother