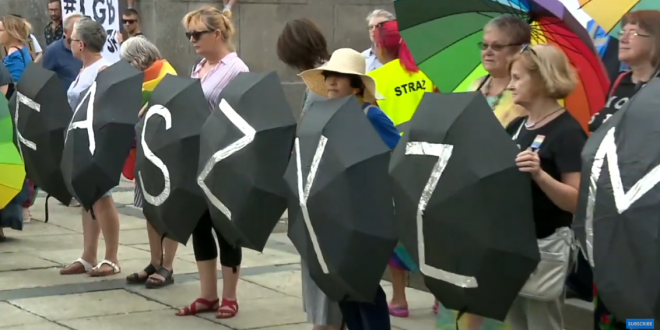 The marchers at the first gay pride parade here in the conservative Polish city of Bialystok expected that they would be met with resistance. But last week when Katarzyna Sztop-Rutkowska saw the angry mob of thousands that awaited the marchers, who numbered only a few hundred, she was shocked.

“The most aggressive were the football hooligans, but they were joined by normal people — people with families, people with small children, elderly people,” she said. They blocked her way, first hurling invective, then bricks and stones and fireworks, she said. From the balconies, people threw eggs and rotten vegetables. Even before the march started, there were violent confrontations, and by the time the tear gas cleared and the crowd dispersed, dozens were injured and Poland was left reeling.

Much as the racist violence in Charlottesville, Va., shocked the conscience of America, the brutality in Bialystok last week has rocked many in Poland and raised grave concerns over a steady diet of anti-gay political propaganda in the country.

Thousands have attended rallies across Poland calling for tolerance and showing support for the LGBT community, whose march last week in the city of Bialystok was attacked by right-wing radicals.

In Warsaw, a crowd of several hundred gathered in a downtown square Saturday with rainbow flags. The “Warsaw against violence” rally was addressed by some participants of the Bialystok march.

Similar rallies were held across Poland where LGBT rights have become a part of the public debate before fall parliamentary elections. Members of the right-wing government have condemned the violence, but some local activists of the ruling party were seen in the attackers’ crowd in Bialystok.

Poland’s ruling Law and Justice party (PiS) has made LGBT rights a campaign issue ahead of parliamentary elections expected in October, with many politicians arguing that pride marches promote unnecessary public displays of sexuality.

“The tension is growing and is tied to the politics of the ruling party, which are hateful and intolerant,” said Marta Zawadzka, a 17-year-old student who attended the gathering. She said examples “include blaming LGBT people and painting them as paedophiles and bad people”.

Police have detained more than 30 people in connection with the violence while politicians, including the prime minister, Mateusz Morawiecki, have condemned the attacks. A Warsaw court this week put a temporary hold on the distribution of “LGBT-free zone” stickers by a Polish conservative magazine.

Activists in Poland say so-called LGBT-free zones across the predominantly Catholic country point to efforts by the ruling Law and Justice (PiS) party to stoke anti-LGBT sentiment ahead of a parliamentary election this fall.

Local media reports suggest that across Poland, more than two dozen cities and towns — some led by PiS members — have declared their regions LGBT-free zones in recent months. The majority are situated in the historically conservative southeastern part of the country.

While the declarations are not enforceable, activists say they signal a targeted effort to exclude LGBT residents. “It’s a statement saying that a specific kind of people is not welcome there,” said Ola Kaczorek, co-president of the Warsaw-based Love Does Not Exclude Association.

⚠️”#LGBT-free zone”.
These stickers are distributed by Gazeta Polska, a nation-wide paper, supportive of the authoritarian right-wing Law & Justice gov.
If it brings to mind “Jew-free zones” in Nazi Germany, it’s because the ideology is the same 😳
In #Poland of all countries 🤯 pic.twitter.com/Sia6lhEeCF

This is #Rammstein ! They support #lgbt 🏳️‍🌈 community during concert in Poland – I’m proud of you @RSprachrohr pic.twitter.com/pnnNvaW1Vo

MALMÖ: We send greetings of solidarity from Malmö to our friends in Białystok, Poland, who during their first LGBT Pride parade were attacked by fascists and radical conservatives.
We stand with you!
Never give up the fight for equality!#queersbashback #antifa #Bialystok pic.twitter.com/kk0pQTfuYG

Recent events in Poland remind us that in the absence of non-discrimination law, LGBTI people are particularly vulnerable.

We count on @vonderleyen @Europeancomm to follow through her commitment to fill up the protection gaps in the EU.

The first gay pride parade ever held in an eastern Poland was met by an angry mob of thousands. The brutality has raised concerns that a steady diet of poisonous political propaganda focused on gays and lesbians had taken on a life of its own. https://t.co/g9ek6KIgLJ

The Roman-#Catholic #Church has condemned the acts of #profanation of the symbols of #Christian faith and the acts of #violence that happened last week during an #LGBT march in #Białystok, north-eastern #Poland.@EpiskopatNews @ChurchInPoland
More:https://t.co/j0Cqikd2Pu pic.twitter.com/6CLeL0EdCO