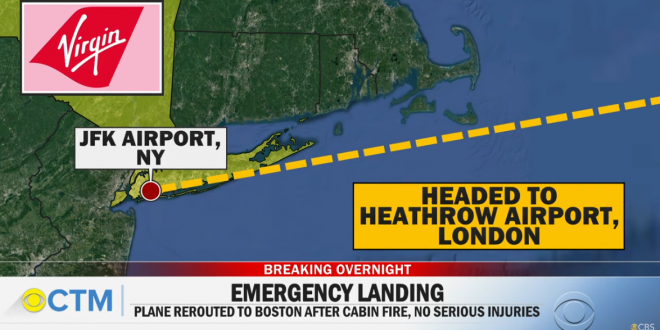 A London-bound flight was forced to make an emergency landing in Boston on Thursday night when a fire broke out on board, authorities said. Flames and smoke appeared to be coming from a passenger seat on Virgin Atlantic Flight 138, after it took off from JFK.

The flight crew extinguished the fire as the pilots made an emergency landing at Boston’s Logan International Airport, according to the Massachusetts State Police.

“Preliminary investigation suggests it is a battery pack consistent in appearance with an external phone charger,” said a Massachusetts State Police spokesman.

Previous Mayor Pete Smacks Down Racist Troll At Event [VIDEO]
Next REPORT: Border Patrol Agent Humiliated Migrant By Parading Him Around Detention With “I Like Men” Sign