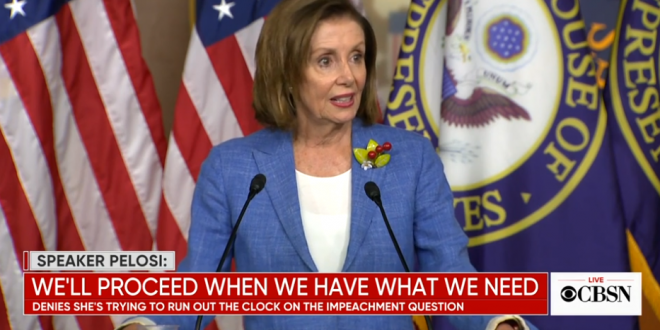 Pelosi On Impeachment: I’m Not Trying To Run Out The Clock, We’ll Proceed When We Have What We Need

“No, I’m not trying to run out the clock,” Pelosi said at a news conference on Capitol Hill. “Let’s get sophisticated about this, OK?” Pelosi repeated her long-standing position that in order to get to impeachment, the party will proceed at a deliberate pace and would only do so with the strongest hand possible.

“We will proceed when we have what we need to proceed, not one day sooner,” she said. “And everybody has the liberty and the luxury to espouse their own position and to criticize me for trying to go down the path in the most determined positive way.”

Amid reports of tensions causing a rift within the Democratic party between newcomers and political veterans, House Speaker Nancy Pelosi and Rep. Alexandria Ocasio-Cortez met for talks on Friday. The meeting comes after the freshman congresswoman accused the speaker of “singling out newly elected women of color” in the Democratic Party.

While Pelosi was spotted nearly half an hour after she entered her office this morning on her way to gavel in a pro forma session of the House, she told reporters the meeting with Ocasio-Cortez was “nice.”

“I have meetings with members all the time,” she added. A photo of the two was tweeted out shortly thereafter, showing the two politicians smiling in Pelosi’s office. “It’s like you’re in a family and in a family you have your differences, but you’re still a family. Does your family always agree on everything?”

Pelosi on pursuing impeachment of President Trump: “We will proceed when we have what we need to proceed.” https://t.co/ewTTRfZuJX pic.twitter.com/j8eWqnkHfw