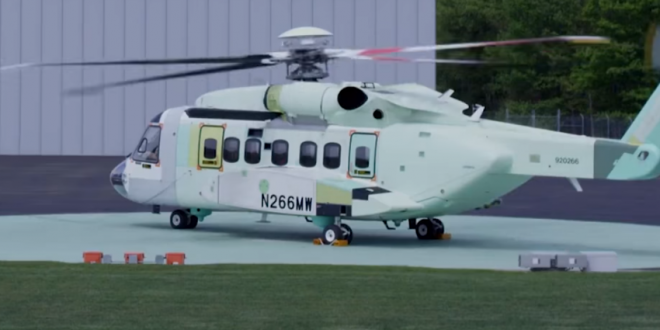 The next generation “Marine One” presidential helicopter will make its first public flight at President Donald Trump’s July 4 event, two U.S. officials confirmed to McClatchy. The helicopter is not in official use yet. It is being produced by a team from Lockheed Martin and Sikorsky. In the last few months the helicopter has flown test flights around Washington, D.C., but this will be its first introduction to the general public, the officials said.

The Navy has taken possession of the first three of the new helicopters, but it will be operated by Marines once it is brought into official service. Known as the VH-92, the next generation Marine One will join an array of other advanced jets, including the VC-25, the president’s Air Force One 747, Marine Corps V-22 Ospreys, Navy F/A-18 fighters, Army AH-64 Apache helicopters and the Air Force’s signature strategic bomber, the B-2.

Next generation Marine One, the Sikorsky/Lockheed Martin VH-92, on the South Lawn today after a test landing for Pres Trump to get a look. Six of the new presidential helicopters were ordered in 2014, another 17 will follow in 2020. Average cost $205-million per. pic.twitter.com/Yp0KMwJN00

The Pentagon awarded @Sikorsky a $542 million contract yesterday for six new VH-92 Marine One helicopters. The aircraft will be delivered between 2021 and 2023. The Marines plan to buy 23 of them to replace the VH-3D Sea King, which has been flying presidents since the 1970s pic.twitter.com/WgTxYPiMd1

Previous Scientists: June Was Hottest Month In World History
Next Woman Pleads Guilty To Mailing Bombs To Obama And Others, Busted By DNA Match Of Her Cat’s Hair [VIDEO]