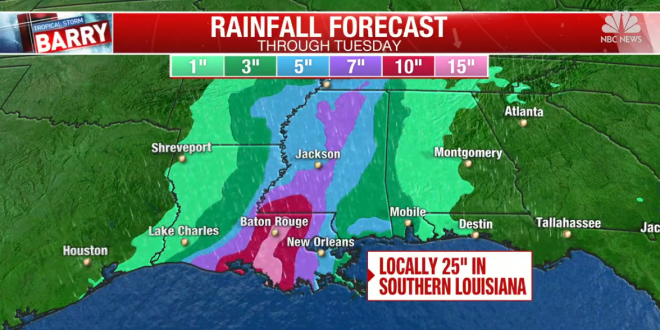 Tropical Storm Barry was moving toward the Louisiana coastline Friday, and nearly 10,000 people have already been ordered to evacuate. The National Hurricane Center said there was a chance the slow-moving storm could strengthen into a hurricane as it comes ashore Saturday.

Barry’s biggest threat will be rain with 10-20 inches expected to fall in parts of Louisiana and southwest Mississippi, the hurricane center said. Some areas could see up to 25 inches of rain, the center said. Officials in New Orleans said the storm will be a test for the levees protecting the city.

The Mississippi River was expected to crest at 19 feet, just a foot below the tops of the levees. National Guard troops have been deployed around the state to help those stranded by flooding.