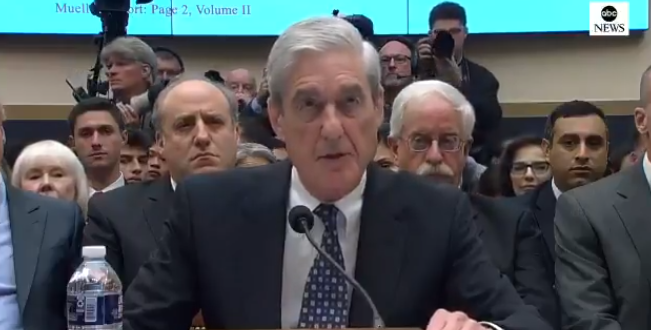 Robert Mueller: I Never Exonerated Trump Of Anything

Former special counsel Robert Mueller on Wednesday doubled down on his assertion that his report did not exonerate President Trump, conflicting with the president’s repeated claims that he was “totally” cleared by Mueller’s investigation.

“The finding indicates that the president was not exculpated for the acts that he allegedly committed,” Mueller told lawmakers, after being pressed on the matter by House Judiciary Committee Chairman Jerrold Nadler (D-N.Y.)

“The president has repeatedly claimed that your report found there was no obstruction, and that it completely and totally exonerated him,” Nadler asked Mueller. “But that is not what your report said, it is?” “Correct,” Mueller replied.

Robert Mueller changing the job of a prosecutor from proving someone ‘Guilty beyond a reasonable doubt’ to ‘Not being able to exonerate someone accused of a crime.’

Here’s the moment that will get played over and over:

Nadler: “Did you actually totally exonerate the president?”

Clip that will be on every TV screen around the world tonight. Asked did he totally exonerate #Trump in #Russia investigation, Mueller answers no… #MuellerHearing pic.twitter.com/mpKn6D16kP