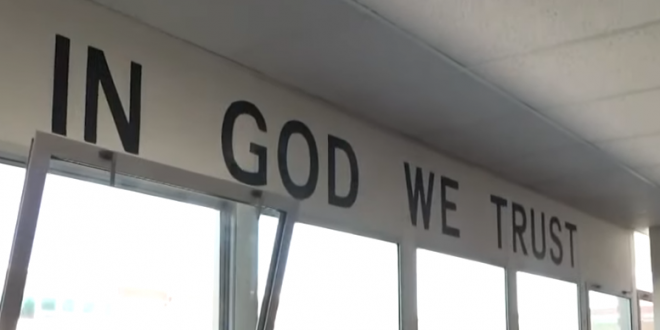 South Dakota’s Republican lawmakers said it was about history — the motto appears on money, on license plates and in the fourth stanza of “The Star-Spangled Banner.” It’s also likely to be discussed in the classroom, where historical inquiry is a key part of the state’s social studies curriculum.

But legislators said they wanted to make it more clear; they wanted to “reaffirm” it. So this fall, when students return to school, a new and compulsory message will greet them: “In God We Trust.” South Dakota joins a growing list of states that force their schools to display the motto.

At least half a dozen passed “In God We Trust” bills last year, and 10 more have introduced or passed the legislation so far in 2019. Similar signage is going up in Kentucky schools this summer, and Missouri could be next.

The new South Dakota law requires the indoctrination to be posted “prominently” in schools. Each letter of the phrase must be at least 12 inches high.

Florida’s law went into effect earlier this year after the bill’s sponsor declared that God had spoken to her in a dream.