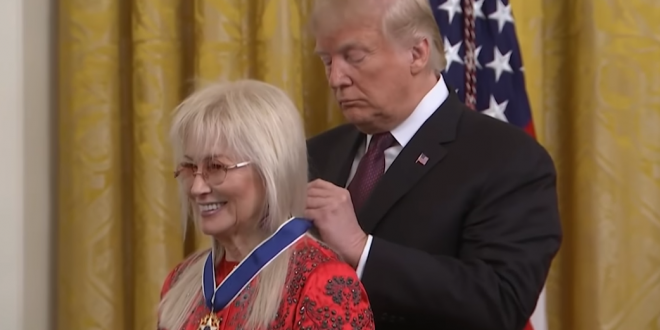 Miriam Adelson: The Bible Needs A “Book Of Trump”

Earlier this year Miriam Adelson, the wife of billionaire casino mogul and GOP megadonor Sheldon Adelson, was awarded the President Medal of Freedom by Trump. Miriam received the nation’s highest civilian honor after she and her husband donated $500,000 to a legal defense fund for Trump associates.

From her column in the Las Vegas Review-Journal:

By rights, Trump should enjoy sweeping support among U.S. Jews, just as he does among Israelis. That this has not been the case (so far — the 2020 election still beckons) is an oddity that will long be pondered by historians.

Scholars of the Bible will no doubt note the heroes, sages and prophets of antiquity who were similarly spurned by the very people they came to raise up.

Would it be too much to pray for a day when the Bible gets a “Book of Trump,” much like it has a “Book of Esther” celebrating the deliverance of the Jews from ancient Persia? Until that is decided, let us, at least, sit back and marvel at this time of miracles for Israel, for the United States, and for the whole world.