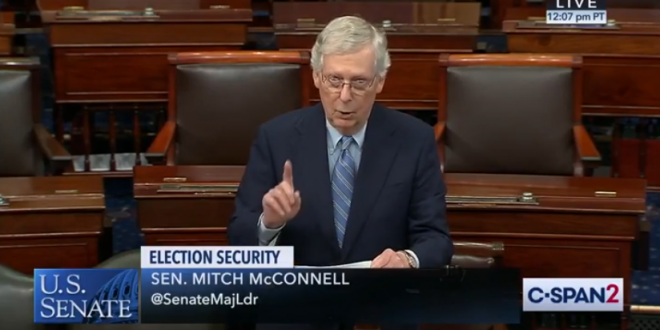 McConnell Lashes Out At Media Over #MoscowMitch

“Last week I stopped Democrats from passing an election law bill through the Senate by unanimous consent, a bill that was so partisan that it only received one Republican vote over in the House. My Democratic friends asked for unanimous consent to pass a bill that everyone knows isn’t unanimous and never will be unanimous. So I objected.

“Over the last several days I was called unpatriotic, un-American, and essentially treasonous by a couple of left-wing pundits on the basis of bold-faced lies. I was accused of aiding and abetting the very man I’ve singled out as an adversary and opposed for nearly 20 years, Vladimir Putin.” – Sen. Mitch McConnell, after #MoscowMitch trended all weekend on Twitter.

Previous VIRGINIA: Republicans Fail In Attempt To Censure US House Rep For Having Officiated Same-Sex Wedding
Next Dershowitz In 1997: Statutory Rape Laws Are Outdated