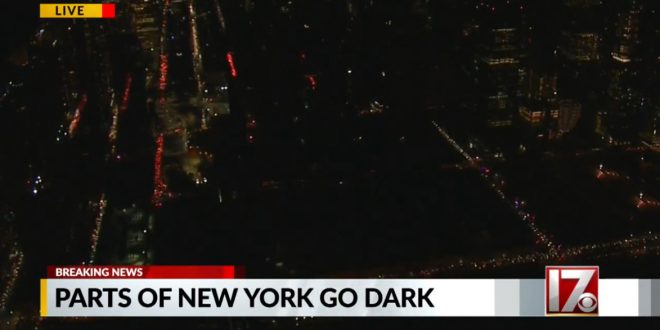 Power was restored to the heart of New York City after a major outage impacted an estimated 72,000 customers, mostly in Manhattan’s midtown and Upper West Side. Con Edison said it completed power restoration to all customers on the West Side of Manhattan shortly before midnight and the last of six electrical networks was back in service.

The outage disrupted life for thousands in the Big Apple. The city’s transit authority tweeted that multiple stations were not operational and were being bypassed.

A senior city official with direct knowledge of the matter says it appears the outage was caused by a transformer fire. The New York City Fire Department tweeted it was at the scene of a transformer fire on West 64th Street.

A power failure plunged a stretch of the West Side of Manhattan into darkness on Saturday night, trapping people in subway cars and elevators for a time, leaving drivers to fend for themselves at intersections with no traffic signals and eerily dimming the lights in a swath of Times Square.

Stores emptied out, and Broadway shows did not go on: Most theaters canceled their performances. In restaurants and bars, people drank by the glow of their smartphones.

The blackout happened on the same date that a large power failure in 1977 plunged the city into darkness. Now as then, Times Square — usually blindingly bright with tourists and crowds strolling to theaters — was dark, and traffic signals were out.

The blackout that darkened parts of Manhattan’s West Side forced the closure of all but a handful of Broadway shows — as well as movie theaters, Carnegie Hall, a Jennifer Lopez concert at Madison Square Garden, much of Lincoln Center and many smaller venues, stranding ticketholders and disappointing tourists who had flocked to performance venues for a Saturday night out.

Some lucky patrons were treated to brief sidewalk songs while producers tried to figure out whether the lights might return in time to salvage Saturday night — generally the most lucrative night of the week for Broadway.

Outside “Hadestown,” the Tony winner André De Shields (who plays Hermes), accompanied by a horn player, serenaded the crowd with a blackout-themed riff on “Road to Hell,” the Tony-winning show’s opening number.

“Mayors are important. And situations like this come up, you know. And you have to be on-site. … I think its important to be in a place where you can always respond, but look, everybody makes their own political judgment, and I’m not going to second-guess anyone either,” Cuomo said on CNN.

De Blasio, a long-shot 2020 Democratic candidate for president, was campaigning in Waterloo, Iowa, when the power outage struck a wide swathe of Manhattan in the early evening Saturday.

The number of affected customers is misleading because ConEd sometimes counts an entire tower as a single customer.

wait. for. it. #Blackout pic.twitter.com/ueFx0e2BZi

A power outage in New York, but it couldn’t stop the Millennial Choirs and Orchestras, creating a makeshift stage right outside Carnegie Hall. #nycblackout pic.twitter.com/fPQJzvTS1t

REWIND 42 years to July 13, 1977…
🔌⚡️A massive #blackout caused by a lightning strike at an electrical substation plunges #NewYorkCity into darkness for 25 hours. Looters raid 1,600 stores and over a thousand fires are set across the city.
📸: Allan Tannenbaum/Getty #NYC #OTD pic.twitter.com/TvCtg2u78v

We’re just walking down the middle of the street #Blackout pic.twitter.com/o95rXQysx4

Very nice. Cast of @hadestown singing to the disappointed audience about the #blackout. pic.twitter.com/zIHuozHIGu