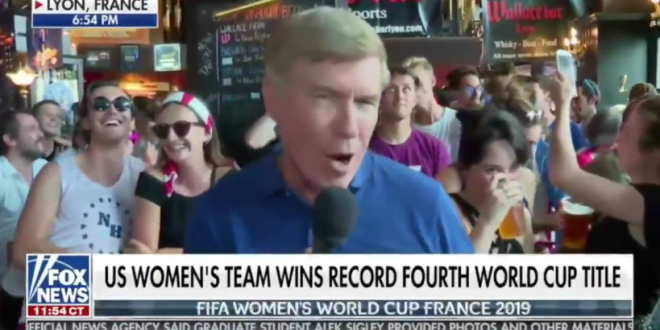 Fox News viewers got an earful when the crowd at a sports bar in France began chanting “F*ck Trump!” live on the air as the network covered reaction to the U.S. Women’s Soccer team’s World Cup victory.

But as Fox’s Greg Palkot gamely tried to report on the goings-on, the patrons of the bar loudly chanted “Fuck Trump! Fuck Trump!”

And a minute later, as Palot interviewed patrons, a young man and woman shouted into his microphone “Democraaaats! U.S.A Democrats!” and “Get that racist out of the White House!”

Fox News went to a bar to cover the soccer game, then everyone started chanting “fuck Trump!” on live tv. pic.twitter.com/H6wbMtg7Wk