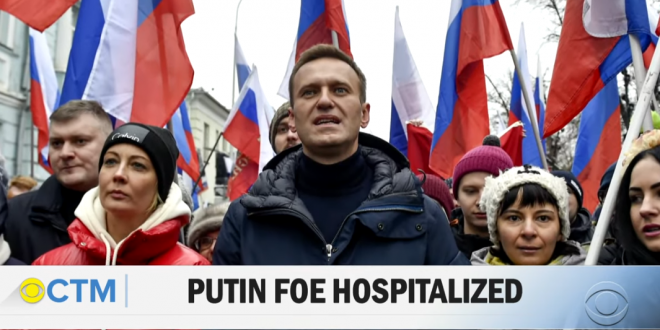 Leading Putin Critic May Have Been Poisoned [VIDEO]

A doctor for Russia’s most prominent opposition leader, Alexey Navalny, has suggested the activist has been poisoned after he was hospitalized Sunday after falling mysteriously ill in a Moscow jail.

Navalny was taken by ambulance to the hospital early on Sunday morning from the jail with what authorities said was a “severe allergic reaction,” his spokeswoman Kira Yarmysh wrote on Twitter.

Initially, one of Navalny’s close colleagues suggested the cause was likely unsanitary conditions in the jail, but by the evening Navalny’s lawyer released a statement from his long-time doctor saying that his symptoms were the result of “an undefined chemical substance.”

Russian police in Moscow arrested more than 1,300 people on Saturday for their participating in an unauthorized rally against a decision to bar several independent candidates from running in upcoming city elections. The German government has called for their immediate release, saying the police response was “disproportionate.”

Navalny, a critic of President Vladimir Putin and the most visible face of Russia’s opposition movement, is regularly arrested for calling on protesters to demonstrate against corruption and illiberal government policies.

He challenged Putin in the 2018 presidential elections but failed to make a stand after a Russian court banned him from participating over a criminal conviction for alleged financial crimes that he described as politically motivated.