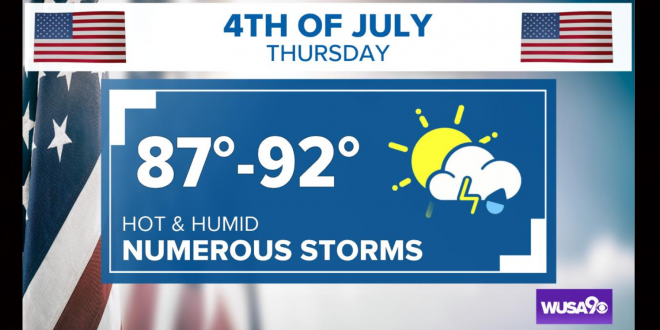 The Independence Day weather forecast is threatening to put a damper on President Trump’s “Salute to America” event on the National Mall. A spokeswoman for the Department of the Interior said the agency expects Thursday’s events “to take place rain or shine.” But with a chance of storms in the Washington, D.C., area, it’s unclear whether the president’s desired flyover and overall attendance could suffer.

The weather could also keep some visitors away from the Mall. Trump is known to fixate on crowd sizes, as he did after his inauguration and some campaign rallies. Storms tend to decrease after sunset when they lose daytime heating, though some may linger after dark Thursday — potentially interfering with fireworks displays. Any storms that develop could contain dangerous lightning, very heavy rain and strong winds.

According to weather reports, there is a 50 percent chance of rain for the DC area on Thursday, with the highest chance coming between 4 p.m. to 9 p.m. — right when President Trump’s parade will take place.https://t.co/dKrNR9JjHh

Previous Border Patrol Chief: AOC Is Trying To Dehumanize Us
Next Fox Host: You Can’t Hijack Something You Already Own