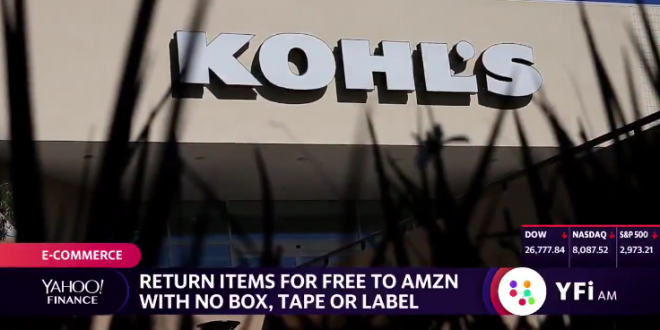 It says volumes about the challenges facing brick-and-mortar stores that the “single biggest initiative” out of Kohl’s this year, according to the national retailer’s chief executive, is that it will now accept and process unwanted orders from Amazon.

Kohl’s said on Monday that it was now accepting Amazon returns at its more than 1,100 stores after running a pilot program in 100 locations. The retailer, which will pack, label and ship the returns for free, expects the program to benefit millions of shoppers along with bringing more people into their stores, Michelle Gass [photo], the company’s chief executive, said in a statement.

The retailer, based in Menomonee Falls, Wis., tested the program, which has been closely watched by the industry and has elevated Ms. Gass’s profile, for about 18 months. It timed its national rollout to the back-to-school shopping season.

it says a lot about modern retail that the “single biggest initiative” out of Kohl’s this year is processing Amazon returns at its 1,100+ stores https://t.co/BkrHraQ53z

Highlight: “It almost sounds counterintuitive … because Amazon is such a competitor, but it makes sense,” @danielhowley says on Kohl’s accepting Amazon returns. https://t.co/ObzMOMFjVy pic.twitter.com/8ojAA4r3dq

According to Kohl’s, no receipt or box is needed in order to return items.https://t.co/wQ0h7d4vil