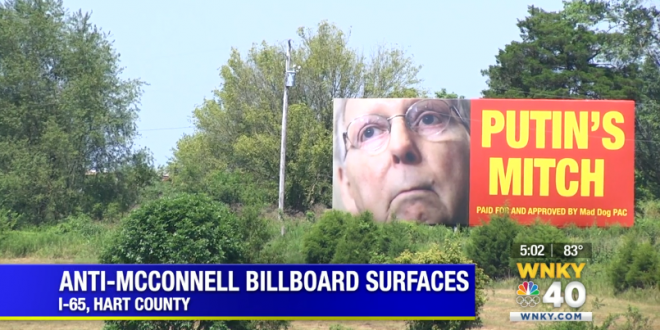 A new billboard along I-65 in Hart County is raising some eyebrows. The sign reads, “Putin’s Mitch” and features a photo of Senate Majority Leader Mitch McConnell.

Mad Dog Political Action Committee paid for the sign and another anti-McConnell sign elsewhere. “That’s what our campaign is about, it’s about putting up billboards that bring awareness to some of these issues directly to the people of Kentucky,” said Claude Taylor, chairman of Mad Dog PAC.

Mad Dog is trying to raise attention to a company owned-in-part by sanctioned Russian oligarch, Oleg Deripaska, who is investing millions of dollars into Braidy Industries, an aluminum manufacturer in Ashland, Ky. Deripaska has close ties with Russian President Vladimir Putin.

Kentucky continues to punch above its weight in Washington, and Senator McConnell is proud to be a strong voice for his constituents in the Senate. As the only one of the four congressional leaders who isn’t from the coastal states of New York or California, Senator McConnell’s view it as his job to look out for middle America and of course Kentucky in particular. That means he uses his position as Majority Leader to advance Kentucky’s priorities.