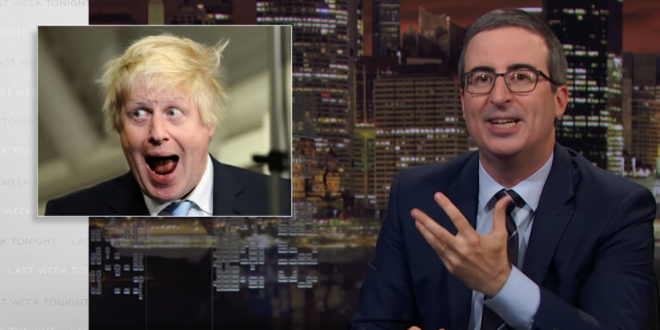 John Oliver is back from his three-week hiatus, and while we wouldn’t say all is right with the world now Last Week Tonight has returned, it’s certainly a relief to watch Oliver let fly on some things that are wrong with the world as only he can do. This week, it’s new U.K. Prime Minister Boris “Britain Trump” Johnson.

Oliver roasts everything from Johnson’s hair and the Olympic flying-fox incident (low-hanging, but always juicy, comedy fruit) and his hobbies (you may or may not recall the cardboard bus interview), to his artfully rumpled personal style (“a cartoon Englishman who dresses like a raccoon that just emerged from David Foster Wallace’s trash”).

While most Americans know Johnson as the ‘Britain Trump’ thanks to his controversial politics and trouble with the truth, Oliver explained that when it came to Johnson, his brash and bumbling persona was much more calculated than Trumps.

“Johnson’s bumbling persona is a carefully calibrated act. Take his hair. Multiple people have said he actually messes it up on purpose. A BBC producer tweeted that he’d “Always ruffle it right before the camera started rolling.”

Previous Al Sharpton Hits Back At Trump: If I’m Such Hateful Con Man, Then Why Did You Invite Me To Mar-A-Lago?
Next Leading Putin Critic May Have Been Poisoned [VIDEO]