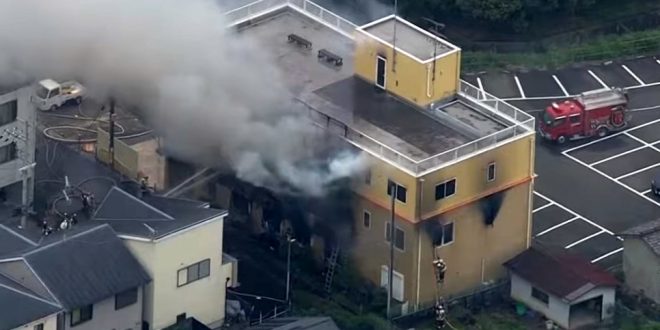 A man screaming “You die!” burst into an animation production studio in Kyoto, Japan, and set it on fire Thursday, authorities said, leaving 33 people confirmed or presumed dead, shocking anime fans in and outside Japan.

Most of the dead and the 36 injured were workers at Kyoto Animation, known for mega-hit stories featuring high school girls, with places featured in the stories even becoming “pilgrimage sites” for their fans.

The fire started in the three-story building in Japan’s ancient capital after the suspect sprayed an unidentified liquid accelerant, Kyoto prefectural police and fire department officials said. Japanese media reported the fire might have been set near the front door, forcing people to find other exits and possibly delaying their escape.

The suspect’s identity and motives remained a mystery. Police said the man, who was being treated for injuries he sustained in the fire himself, was neither a current nor former employee of Kyoto Animation Company, a renowned producer of hit TV series.

Affectionately known as KyoAni, the company was founded in 1981, and has a devoted fan base worldwide.

Prime Minister Shinzo Abe expressed his condolences to the victims of the blaze in a tweet, calling it an “arson murder spree.” “I’m speechless,” Abe said. “I pray for the souls of those who have passed away. I would like to express my condolences to all of the injured and wish them a speedy recovery.”

Previous ISRAEL: City’s Rabbis Declare That All Dogs Are Bad And Anyone Who Owns One Will Become “Accursed”
Next Trump Admin Floats Less Oversight Of Nuclear Plants