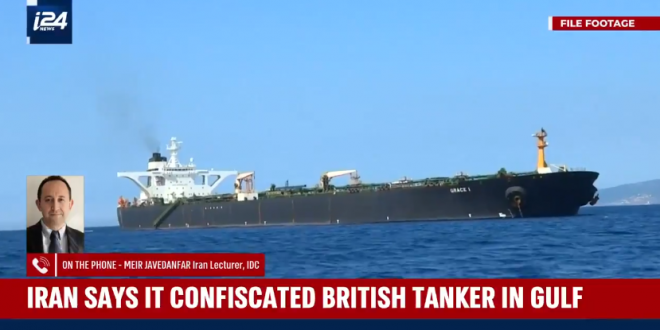 A British-flagged oil tanker has been seized in the Gulf by the Iranian Revolutionary Guard, Iran media say. The owners of the Stena Impero, which was bound for Saudi Arabia, say they have been unable to contact the vessel and it is “heading north towards Iran”.

The company says there are 23 personnel on board and it was approached by “unidentified small crafts and a helicopter” in the Strait of Hormuz. The Foreign Office is “urgently” looking into the reports. The government’s emergency committee, Cobra, is meeting in Whitehall to discuss the incident.

The move by Iran follows the seizure of an Iranian tanker earlier this month by the British Royal Marines on suspicion it was breaking European sanctions and taking oil to Syria. Iran has called for the release of that ship, and earlier Friday, a British court in Gibraltar extended the detention of the Iranian oil tanker.

Oil prices moved higher, with West Texas Intermediate up about 1% at $55.98 per barrel just before the close. “This is a big escalation ahead of the weekend, and the risk premium that had come out of the market over the past week is going to come rushing back in,” said John Kilduff, partner with Again Capital.

CNN: The British-flagged tanker ‘Stena Impero’ has been seized, according two US defense officials. One of the officials said the tanker was taken by Iran.

Iran is claiming to have captured a British oil tanker in the Straight of Hormuz.

Now would be a *great* time to have sane leadership.

UK flagged oil/chemical tanker STENA IMPERO doing something interesting at the moment. It’s port is the opposite way of where it’s heading, and it’s heading directly for the #Iran|ian island of Qeshm.. 🤔 pic.twitter.com/F6Mjd8AnvI

The Foreign Office is “urgently seeking” further information following claims from Iran that a British-flagged tanker has been captured in the Strait of Hormuz.

To get all the latest updates on this story, click here: https://t.co/YQsy5DNNYM pic.twitter.com/jgUiO4SJuP