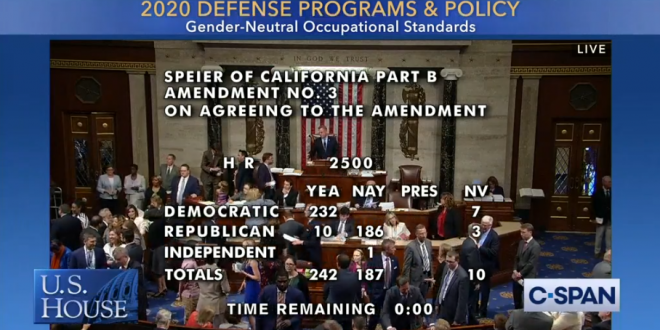 The House on Thursday approved an amendment to the annual defense policy bill aimed at reversing President Trump’s policy banning most transgender people from serving in the military.

The amendment to the National Defense Authorization Act (NDAA) would enshrine in law that any person who meets gender-neutral occupational standards can serve in the military regardless of race, color, national origin, religion or sex, including gender identity or sexual orientation.

“Over the last three years, 14,000 transgender service members have served openly and successfully,” said Rep. Jackie Speier (D-Calif.), the sponsor of the amendment.”

The House just passed an amendment to the #FY20NDAA that ends President Trump’s ban on transgender Americans serving in the military.

And they need our support in this fight for the right to fight. pic.twitter.com/FgwXngkrZO

By a vote of 242 to 187, the House just adopted an amendment to the #FY20NDAA that will put an end to the President’s discriminatory, unconstitutional ban on transgender service members. Thank you @RepSpeier for your tireless work to create a more inclusive military.