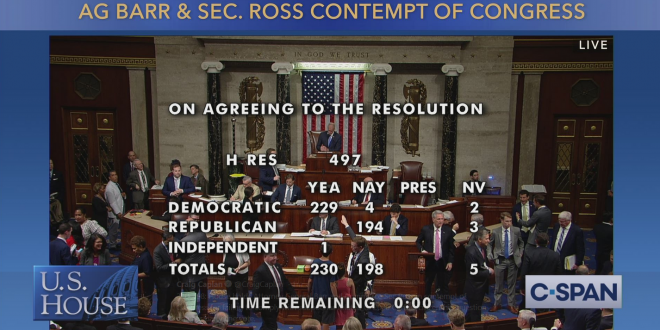 The House voted Wednesday to hold Attorney General William Barr and Commerce Secretary Wilbur Ross in criminal contempt of Congress for obstructing a probe into the administration’s failed bid to add a citizenship question to the 2020 census.

The House scheduled the vote after Barr and Ross withheld documents that had been subpoenaed by the Oversight and Reform Committee as part of its probe into the origins of the now-scuttled citizenship question.

“I do not take this decision lightly,” Oversight chair Elijah Cummings said on the House floor before the vote. “Holding any secretary in criminal contempt of Congress is a serious and sober matter, one that I have done everything in my power to avoid.”

230-198: House holds Attorney General Barr and Commerce Sec Ross in contempt of Congress for failing to comply with subpoenas related to 2020 Census citizenship question on near party line vote.

Previous Trump: “There’s A Lot Of Talk About The Fact” That Dem Rep. Ilhan Omar Was Married To Her Brother [VIDEO]
Next Epstein Used His Fake Passport In Multiple Countries