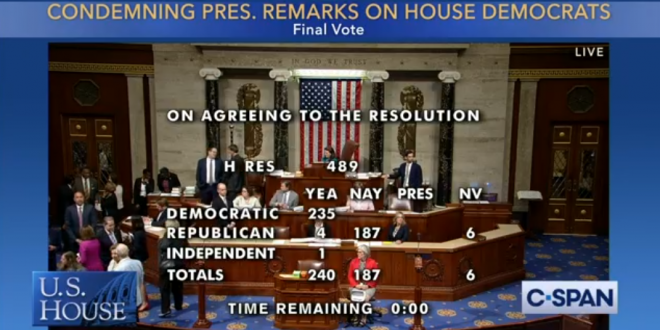 House Passes Resolution: Yes, The President Is A Racist

A House Democratic effort on Tuesday to formally denounce comments by President Trump devolved into a partisan brawl on the House floor as Republicans tried and failed to stop Speaker Nancy Pelosi from calling the president a racist.

Mr. Trump on Tuesday denied that his tweets suggesting that four minority congresswomen leave the country were racist and implored House Republicans to reject a resolution that condemns his statements as “racist comments that have legitimized increased fear and hatred of new Americans and people of color.”

The president raged on Twitter against the resolution, calling it a “con game.” He renewed his harsh criticism of Representatives Alexandria Ocasio-Cortez of New York, Ilhan Omar of Minnesota, Ayanna S. Pressley of Massachusetts and Rashida Tlaib of Michigan.

“These comments from the White House are disgraceful and disgusting and the comments are racist,” Pelosi said as she first introduced a resolution condemning Trump’s incendiary remarks about four Democratic congresswoman.

“Every single member of this institution, Democratic and Republican, should join us in condemning the president’s racist tweets. To do anything less would be a shocking rejection of our values and a shameful abdication of our oath of office to protect the American people. I urge a unanimous vote,” Pelosi said.

Rep. Doug Collins, R-Ga., asked Pelosi if she would like to “rephrase her comment.” House members are barred from making disparaging remarks about the president on the floor of the House, but the resolution is aimed at criticizing the president for comments directed at four congresswomen of color who he said should “go back” where “they came” from.

See the full text of the resolution here.

WATCH: Complete remarks from @SpeakerPelosi — “These comments from the White House are disgraceful and disgusting and these comments are racist.” pic.twitter.com/EB99FmC18U

Republicans flipped out as Rep. Eric Swalwell ran through a list of racist Trump statements and positions on the House floor. pic.twitter.com/OFk1ySStpe

Breaking: House passes resolution that “strongly condemns President Donald Trump’s racist comments that have legitimized and increased fear and hatred.” The vote is 225-184, with 4 Republicans voting for it, and remaining votes still being tallied.